Amy Howton: Fear of failure can be paralyzing. Unfortunately, it is so real in our culture and especially prevalent when it comes to racial justice and Becoming Beloved Community. We get stuck because we’re scared that we are going to mess up. I’m thankful that as we’ve partnered in this work, you and I have framed failure as opportunity for growth and transformation.

Cherie Bridges Patrick: Yes, failure is an opportunity to learn. Can you give an example of where you’ve experienced this in our work together?

Amy: This is a good question. Honestly, I feel like it’s how we have formed our relationship. Even just a few hours ago, you let me know that I was being naive in my thinking. I know this is a small example, but these moments of acknowledging where we miss the mark say to me that we are in this to learn and grow, together. It allows me to not be so paralyzed in my thinking and doing, but that we are going to see every opportunity to learn. When you pointed out how I was being naive, if I was fearful of failure that could have shut me down. But instead, I feel like it strengthened our relationship and allowed us to learn and grow.

Cherie: When I think of failure and how paralyzing that is for all of us at different times of our lives, where have I been paralyzed in this work? Early on, I was fearful about showing up. Fearful about Cherie showing up. In the context of our (Becoming Beloved Community) leadership group, we’ve got three white women and one African American woman. That dynamic, I can’t let that play here. There’s a history of white and black women having conflictual relationships. There’s been times when we’ve had conversations, there was a fear for me around showing up as my whole self. When do I express my anger? I can catch a lot and put the brakes on things and create space where folks are uncomfortable. So, moving through that fear and pursuing the longer-term goal which is healing. When I keep my eye on that and keep my eye on God then fear of failure becomes less of an issue; it allows me to come to the table as me.

Amy: I love that. You always bring it back to the right relationship to God. It reminds that in the Bible, “do not be afraid” is the most commonly used phrase.

Cherie: And when I step out of that vertical relationship with God to a horizontal focus on me and you and other people, that’s when the anger and frustration and pissossitty (yes, that’s a word!) comes in.

Amy: Yes. And so, when we experience this fear of failure, how do we create it as an opportunity for transformation?

Cherie: We bring it to light. And we learn from it. I know the history of how white women and black women have worked together. There’s a lot of deceit going on and that probably plays in my mind more than I’m aware of. When I talk about trust and distrust, that’s prominent. I know this history and I need to be careful.

Amy: I’d say more than deceit. We have oppressed. I’m wondering…given how hard it is, and how painful it is, what are we learning about being ok with essentially being flawed humans? And failing? One thing I’m learning – you are teaching me this – is that it’s hard to see our failure without others. I need you to help me see myself. I need relationships. My question remains though, how do we take our failure – the very failure that can harm you – and use that failure to then transform ourselves? Is it enough for me to confess?

Cherie: I think what we do is to learn, and repent. If you’re going down a path and you’re going in the wrong direction, you change and go down another path. These moments let us ask ourselves, what direction do we need to turn in? There has to be something that follows it. It’s not just saying it. Confessing isn’t enough.

Amy: It’s the repairing the breach.

Cherie: Yes. There has to be a step in doing something. What do I do when it happens again? How does this build and strengthen our relationship? It’s still between me and God. I’m sitting here with Amy, and God is in my values. I have to go back there. If I step out of that relationship then I need to repair the breach. This is part of healing. Putting it out there and feeling the sting. And still sitting at the table with each other. Are we going to keep doing this work when we are hurting and failing? Are we going to let that stop us?

Amy: Something that you said reminds me that this is what we are being called to do in Becoming Beloved Community. This is a process of spiritual transformation, it is learning. It’s a very different thing from a program or initiative with a set of actions or clear directives that we can check off. This uncertainty makes people very uncomfortable. We don’t know how to get there, and yet that is exactly what we are called to do.

Cherie. Yes. We are called into something that we have proven we are incapable and unwilling to do. So now, we are offering this opportunity to be uncertain, and unclear as to what needs to happen.

Amy: We’re saying Becoming Beloved Community is about God. We’re saying that uncertainty allows us to build that right relationship with God, moment by moment, as a way of life. To discover who we are, and to discover and strengthen that relationship. We can only do that in times of uncertainty, and this calls on a willingness to fail.

Cherie: Failure is a blessing, if you can see something in it. It’s failure that forces us to grow. If we are willing to stay with failure long enough, that’s when you grow. You’re not ever going to grow in a safe space. You’re not ever going to grow if we don’t fail. In these moments of failure are the seeds of self-transformation. They allow us to start sowing something different. There needs to be self-compassion and a willingness to fail enough to really let those lessons teach us something. 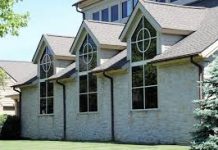