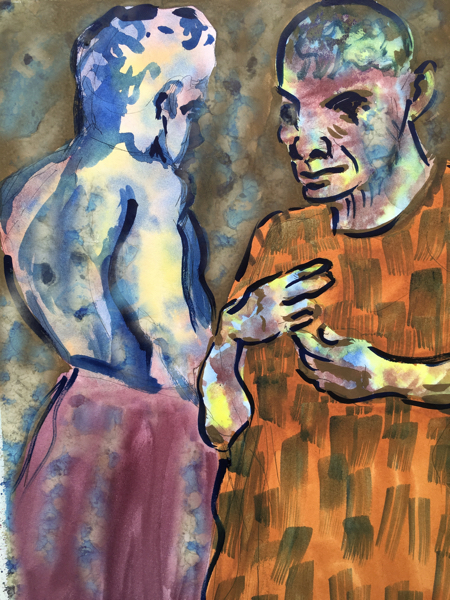 This brief little story of Paul and Barnabas’ falling out makes me sad. Barnabas, the son of encouragement, just can’t keep himself from encouraging everyone he runs into, even if they sometimes let him down. No doubt Paul has heard people repeating the three stories of those who turned back on the way to Jerusalem, which Luke himself tells in chapter 9, v.57-62 of his Gospel. John, also called Mark, isn’t much of a disciple in Paul’s eyes. He’s too easily dissuaded from the task at hand. But the same spirit of generosity that led Barnabas to become Paul’s advocate leads him to forgive John Mark and invite him to try again.

I have to admit that I’m more of a Barnabas than a Paul, sometimes to my distress. People do, occasionally, let me down, and when they do I tend to trust them when they ask to try again. Sometimes this pays off and sometimes it doesn’t, but I keep doing it, and sometimes I wonder why. Maybe it’s because I believe in the beauty and benefit of belonging to a community so deeply that I can’t stand to block anyone’s access to it. But I’m settled in place, not on a dangerous mission to convert the Gentiles. There’s a kind of luxury in knowing that the churches that I serve are stable and probably won’t be damaged by someone not showing up to a potluck. Paul doesn’t have that luxury.

I agree with Paul that following the Way of the believer in Jesus Christ is the most important thing. I agree with Barnabas that most of us aren’t going to be very good at this, and that we need patience and forgiveness. I think that Luke holds both of these opinions, admiring both Paul’s rigor and Barnabas’ generosity. It’s sometimes hard and unsettling to hold both positions, to have to be careful and exercise judgement when encountering different people and different situations. But it feels, ultimately, more loving to do so. In this little passage, both Paul and Barnabas are exercising such judgement, it just leads them to different conclusions.