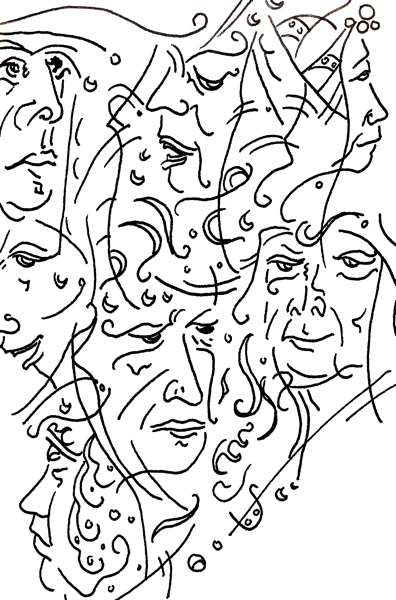 Three things immediately stand out to me about the community that gathers in the synagogue in Thessalonica. The first is that they’re open to discussion and debate. Some of their leaders eventually reject Paul and try to stir up the civic authorities against him, but it’s notable that he’s allowed to show up and dispute with them on three consecutive sabbaths. I’m trying to imagine a stranger coming into my parish on three Sundays in a row and interrupting the sermon each time in order to draw me and everyone else into a long dispute. I think that at first I’d be bemused, then annoyed, and then angry. It would seem to me that this stranger wasn’t respecting the community of the parish and didn’t care about the rites and rituals we’d set-up. Some part of me would be mad on behalf of the community of the church, and another part of me would be mad on my own account because, after all, I carefully prepare my sermons and now I’m not being given the chance to deliver them. I have to admit that the synagogue in Thessalonica is as tolerant, if not more tolerant, than my own community.

The second thing that stands out is that there are a lot of insiders and outsiders in this synagogue, but it’s hard to draw any very strict conclusions about them. There are the members of the community who are Jewish, and then there are a lot of curious gentiles up in the balcony or leaning against the walls. Within these two groups there are further subdivisions, as the women seem to have a very different stance towards Paul than the men do. Even among the leaders there are divisions, as some are willing to go along with the gentiles when they’re convinced by Paul, and some are deeply hostile to Paul. It would be nice if this was a simple story about outsiders and insiders, but Luke seems to be telling us that, in any community, there are personality conflicts and histories of being excluded, even among the supposed insiders, and divisions of class and race and social standing. In preaching the message of Jesus, Paul is preaching an end to these divisions. But before we get high and mighty about our own communities, we should survey them in our minds and acknowledge that these divisions exist within us as well.

Finally, it’s striking to me that Paul’s opponents can’t leverage their own authority within the community in order to stop him, but must call on the outside authorities. I find myself wondering if I would do that. If someone came and disrupted Sunday worship for three weeks in a row, and kept showing up after I’d taken him aside and tried to have a kind and reasonable conversation about respecting the community’s norms, would I be tempted to call the cops? Probably. I would think of all sorts of justifications – the interloper wasn’t respecting the church’s property. As Americans, we have a right to say who comes into our spaces and who doesn’t. And the goodness and graces of my community are worth preserving, they’re something I deeply love, and it hurts to see them disrupted (even if they’re not as good and graceful as I thought). If it came to the test, my guess is that I’d be very much tempted to act like Paul’s opposition and go running to the civic authorities.

When I play this scenario out in my mind, I can find ways to feel justified. What if it was a homophobic, racist, Nazi-sympathizing preacher who kept showing up, week after week? Many Episcopal churches have been protested by far-right ministries, and I don’t think they’re wrong to ask the police to keep the protesters out of their Sunday morning services. But what if it was a young woman who kept showing up, a Somali refugee or an undocumented woman from Guatemala, and what if their message was for us to actually do what we purport to believe in? What if they pointed out my own hypocrisy of non-action week after week? My attitude would change. I wouldn’t think I was justified in calling the cops on them, even if the weekly Sunday attendance was plummeting. Or, to add just one more possible scenario, what if it was a Mormon who showed up, who wanted to tell us how we were misunderstanding Jesus, but did so in a polite and gentle way? Would I be justified then?

As a progressive clergy person, I obviously know my own answers to these questions, but I also don’t want to dismiss them too easily, because wrestling with them is important. This situation at Thessalonica has played itself out again and again throughout human history. In America alone, there have been instances when klansmen marched into churches to deposit money on the altar, the so-called klangeld, and through that action symbolically claimed that the church was on their side. There have been other instances where civil rights leaders and their followers poured out of churches and into public spaces (parks, buses, lunch counters, city squares) and disrupted everything in order to further the cause of justice. The story of the synagogue at Thessalonica asks us to imagine what kind of disruptions we’d be willing to tolerate, and why. It also asks us to consider what’s going on in our own communities. How united are we, really? Where do the divisions lie? And are those divisions sharp enough that they could lead to the community falling apart, if it was tested? These are useful questions to ask, because the potential for a synagogue at Thessalonica-like situation is always present in our lives.