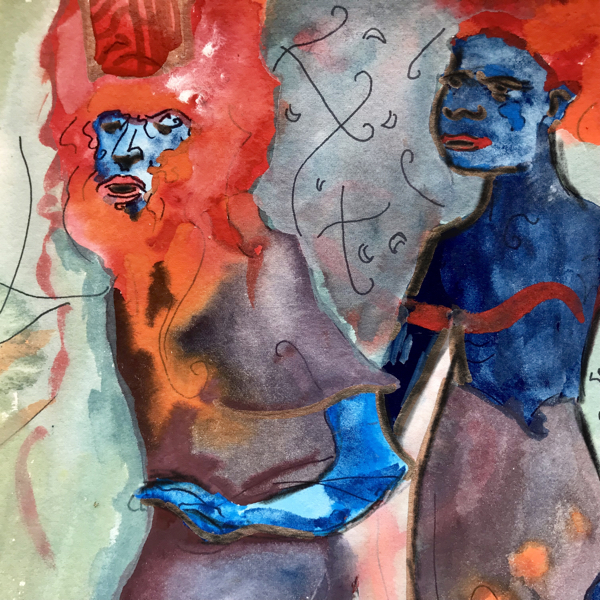 My grandmother often told the same stories over and over again, to such an extent that we made up a joking diagnosis for her, saying that she had RSS, Repetitive Story Syndrome. My daughter has begun to point out my own tendency to repeat stories, and has also begun noticing when she does this. All people repeat stories, and I first became aware of this face years ago, when I was reading the New England writer Sarah Orne Jewett. This simple passage from “The Farm House Kitchen” lodged in my mind:

The repetitions of the best stories are signal events, for ordinary circumstances do not inspire them. Affairs must rise to a certain level before a narration of some great crisis is suggested, and exactly as a city audience is well contented with hearing the plays of Shakespeare over and over again, so each man and woman of experience is permitted to deploy their well-known but always interesting stories upon the rustic stage.

I might have read more into this passage over the intervening years than is really there, but Jewett made it clear to me, for the first time, that its not the originality of a story that’s important, but the situation into which its told. Repetitive stories have a kind of liturgy about them. We all know them already, yet we retell them because they speak to the present moment and cast a new light on our current circumstances. My grandmother’s stories did this. I hope that my repeated stories do this, too. I’m sure that the repetition of Jesus’ story, told by different speakers at different moments in Acts, performs the same function. The circumstances that surround the retelling are important, and the purpose of the retelling shifts depending on the audience, the teller, and the place in which it’s told.

For this first retelling, it’s Peter who is the storyteller. Jesus told him that he would be the Rock of the Church. Jesus even changed his name from Simon to Peter, which means rocky. But at the end of Luke’s Gospel Peter is anything but steadfast. This storytelling of Peter’s is the moment in which Jesus’ prediction begins to be realized. And Peter is not speaking to a group of believers, but to a crowd of strangers, some of whom are scoffers. They are an echo of the crowd that mocked and scourged Jesus on his way to the cross. Peter is speaking into a moment of miracle. Something powerful and overwhelming has happened – the rush of wind, the tongues of flame! – and now Peter sets out to make meaning out of it, something that we all have to do after important experiences. But it’s not personal meaning he’s making, although that’s certainly included in what he says. He’s making meaning in a way that will be of use to the community, to the church that is forming. By quoting the Hebrew scriptures, he is telling a story that his listeners already know. But he’s doing so in a new way, and drawing new conclusions from it. The repetitive story becomes the new story, due to the person who is speaking it, the people who are listening to it, and the moment of wonderment that has given rise to this retelling.

Mary Pierce Brosmer, who founded Women Writing for (a) Change in the 1990s, wrote a book about her organization that offered its transformative teachings to people at large. She begins the book by surveying the landscape, telling the story of how WWf(a)C came to be. But even this seemingly historical summary serves a purpose. She uses it to teach us that we should all survey our landscapes. That we should think about the communities we belong to, and try to tell their stories. Because in a very real sense, telling the stories of our communities means telling our own stories. In this telling, we will arrive at a degree of self-understanding. For my grandmother, many of her stories were about the village in Yugoslavia where she became a young wife and mother, and that she had to flee from at the end of World War II with my mother and uncle in tow. Many of my stories are about my teenage and college years, and I tell them to my daughter as she goes through her own adolescence as a kind of camaraderie, so she will know that she’s not alone in her experience. For the most part, these aren’t community stories, because we no longer live in the long settled communities of Jewett’s day. But the church is such a community, and the retelling of stories in Acts holds out the possibility that telling and retelling the story of a church is a way of talking about resurrection.