The profound anticlimax of Acts continues, with more bureaucratic jostling by Roman officials whose names begin with the letter F. As a reader, I find myself longing for the beginning of Acts, those wonderful forty days when the risen Jesus was with the disciples, teaching and interacting, and everything was miraculous, bathed in a golden light. Where, oh where, have those days, and that feeling of miracle, gone? Luke seems to be structuring his two books using an ancient Hebrew literary convention, or at least a modification thereof. Stories like the Jacob cycle in Genesis start and end in similar fashions, and the most important part, the climax, if you will, is what happens in the middle of the story. So it is with Luke and Acts. Luke begins, and Acts ends, with nods to the administrative and political structures of their times (consider the listing of authorities in Luke, ch. 3). They both have significant sections spent outside of Jerusalem (at the beginning of Luke and during Paul’s travels in the second part of Acts). And Luke ends, and Acts begins, with the disciples in Jerusalem. The resurrection is the hinge point, the thing that happens in the middle that everything points to.

The resurrection invokes the Kingdom of God. I don’t think it’s going too far to say that the Kingdom of God is the resurrection world, the reconciled and healed creation. It is the place where miracles happen, where people are healed, where our small selves disappear so that our large selves can find expression, and where we can see, know, and walk with God.

J.R.R. Tolkien once gave a famous lecture about primary and secondary worlds(1). For Tolkien, our everyday world is the primary world, and the world of his stories (and the stories of others that often get described as science fiction or fantasy) describe a secondary world. He used these two terms, primary world and secondary world, because he wanted to make sure that his audience understood that his stories couldn’t be dismissed as mere trifles. Instead, he said, people respond to a well told story with the same emotions, passion and hope with which they respond to a factual, historical narrative. Our capacity to love and learn from characters from the secondary world is at least as strong as our capacity to love and learn from characters from the primary world.

I of course love and honor this claim by Tolkien, and have often felt, when reading or watching a movie or show, as deep an involvement with the people I meet in the story as I feel with the people I know outside the story, in ordinary life. Sometimes, I feel a deeper involvement, because I’m privileged, in a story, to know the inner lives of the characters in a way that I don’t know the inner lives of my friends.

This might seem like a long digression, but as I’ve thought about this distinction of Tolkien’s, I’ve begun to wonder if, for Luke, the Kingdom of God, the resurrection life, isn’t the vibrant, beautiful secondary world that sparks our imaginations and ignites our hope. I’ve even found myself quibbling with Tolkien’s use of the two terms, because it is the resurrection life that feels primary to me, and the drab, everyday world of corrupt officials and petty injustice that feels secondary. The end of Acts is rather a slog, but I think Luke knew what he was doing. He is providing a contrast between this secondary world of Paul’s imprisonment, and the bright, shining, miraculous world at the beginning of the book, when Jesus walked with the disciples.

I was reminded of this by my friend Sarah Iles Johnston’s wonderful new book, The Story of Myth. 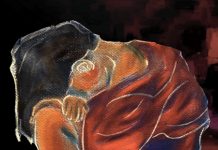