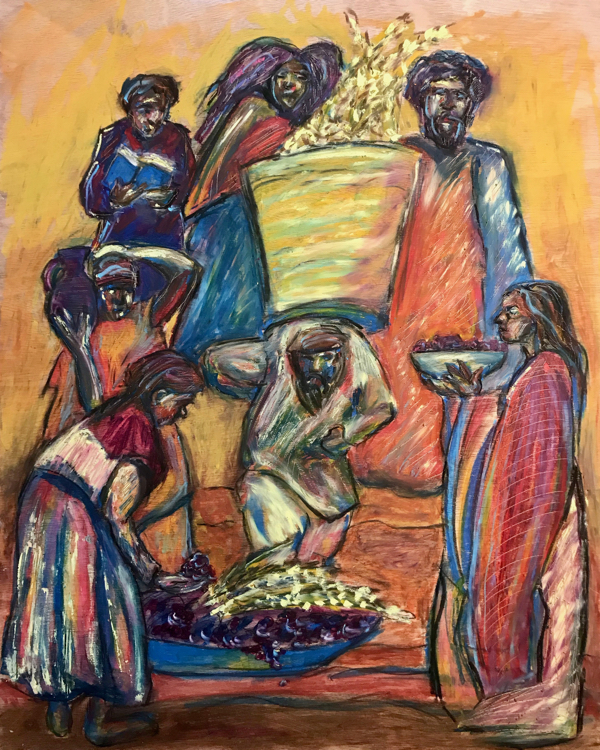 Already there were two social identities at odd with each other within the community of the disciples, those who identify as Hebrews and those who identify as Hellenists. Both these groups were entirely comprised of Jews, but the Hellenists came from other places than Israel. They, or their parents, had been living in the diaspora, in Alexandria or Antioch or Rome, or lesser known and far flung places. They didn’t have the same community ties as the Jews who were living in the Roman province of Judea. The difference in identity between the Hebrews and Hellenists seems small to our eyes, but it was obviously large enough to them to cause difficulties. They knew which group they belonged to, and they watched carefully to see if their group was slighted or supported. They knew that all of the important people, the people in positions of power, came from the Hebrews. The uneven distribution of food may not have been intentional, which may have made the tensions worse. A person who has friends and family surrounding them is likely to see to their needs first. It’s very hard for us to be as aware of the needs of strangers as we are of the needs of those we love. And our pride often causes us to take the most offense at someone pointing out our unintended offenses. Given all of this, we can imagine how the cycles of suspicion and incrimination grew between these groups.

The disciples response was to create the nascent church’s first order of ministry, the deacons. It is easy to be critical of religious hierarchies, and I often have been critical of them while writing this blog. Yet this is the story of why we have them. The needs of community are great and the labor is broad, and no one person, or group of people, can do everything. The funny thing about these deacons is that they will soon overspill their original mission, and concern themselves with much more than a fair distribution of food. They will become the teachers and converters, the ones who are walking the roads and byroads, meeting with strangers and teaching them about the Way of Christ. Stephen and Philip, especially, will set the model of what Christian ministry is like. It starts with very specific goals and roles, but, like grace, it is always expanding beyond any boundaries that are set on it.

In Bible study, we spend some time considering what Jesus means in Luke 12 when he says that “everyone who speaks a word against the Son of Man will be forgiven, but anyone who blasphemes against the Holy Spirit will not be forgiven.” If the Holy Spirit it the energetic, creative manifestation of God in the midst of us, then blaspheming against it involves trying to limit its reach and power to move us. If the early church had been too strict in its definition of roles, then it would have blasphemed against the Holy Spirit. After all, if the Holy Spirit prompted Stephen to preach and Philip to go wandering, who were they to get in its way? We sometimes forget that the Holy Spirit pushes the limits of our institutionalism. We sometimes blaspheme against it by limiting the ministry of our fellow Christians. But the Beloved Community of the disciples didn’t do that. They understood that the growth of their movement meant a need for certain ministries and certain roles, but they never stopped people from answering the call to something new within those roles.