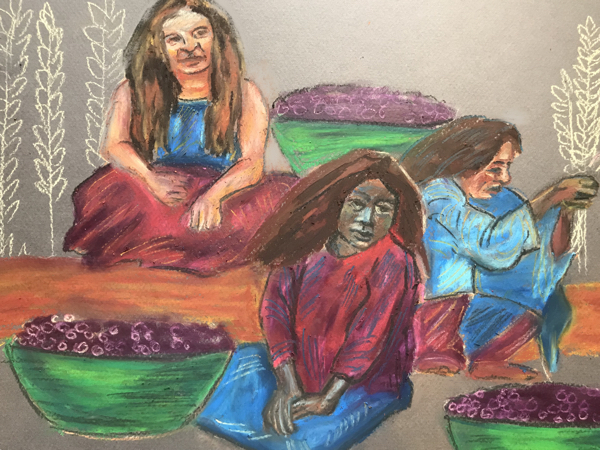 Every group, every family, every community has traditions, many of which are unspoken, unacknowledged even by the group that adheres to them, especially if they’ve never been articulated. A friend of mine once used the example of a new spouse marrying into a family with several children. The tradition of the house on Christmas morning is for everyone to sit on the stairs and wait until everyone is assembled before going down to the living room to open presents. No one has told the new spouse this, because they’ve never realized that it was what they were doing, let alone thought of it as a tradition. So on Christmas morning she goes barreling down to the living room, enraging everyone for reasons that neither they nor she really understands. Norms and practices are important to us, and they’re unavoidable, but they must be held lightly, and with a spirit of generosity.

For the members of the Synagogue of the Freedmen, they can’t be held lightly, because they originated with Moses. Last year, as we were reading the Book of Exodus, I realized that all of those priestly rules in the last ten chapters or so must have come as quite a relief to those who had been inadvertently establishing traditions, and wanted other people to follow them. The way they were doing things was now sanctioned by God. And yes, I’m assuming that they were setting the tabernacle up and praying in a certain way before Moses received God’s instructions on Mt. Sinai. I assume this because of the ancient principle of lex credeni, lex orendi, which can be translated as belief following practice. We start to do a certain thing because it’s beautiful and it feels right, and then we come up with theological reasons for why we’re doing it. A good example of this might be the stoles that clergy wear. I’ve read spiritual and theological justifications for wearing them that claim that they symbolize the towel with which Jesus wiped the disciples’ feet at the Last Supper. Historically, that’s not true. Stoles were what officials wore to signify their authority in the Eastern Roman Empire, so when the church gained authority, church officials started wearing them, too. Given that, it would be hard to find anything sacrilegious in the choice not to wear them, but clergy continue to wear them because its traditional for them to do so.

The previous paragraph might seem like a long digression, but my point is that we should never get so wrapped up in our traditions that they get in the way of our capacity to love. That’s exactly what the members of the Synagogue of the Freedmen are doing, and what the Sanhedrin, the temple council, do as well when they call Stephen before them to answer charges. There he is, his face shining like that of an angel, and yet they’re willing to condemn and kill him because he went racing down the stairs on Christmas morning instead of sitting and waiting like everyone else. To me, this passage has instant applicability to everyday life. What traditions and customs are you living by, without even knowing that you’re living by them? A good way to tell is by watching your own annoyance, and seeing which actions by others cause it to flare. And once you notice it, and know which customs matter to you, can you practice holding them lightly? They can still be important to you, and it’s good to articulate their importance to yourself and others. But can you do so in a spirit of generosity, and even risk letting them go if they’re impinging on your ability to love?