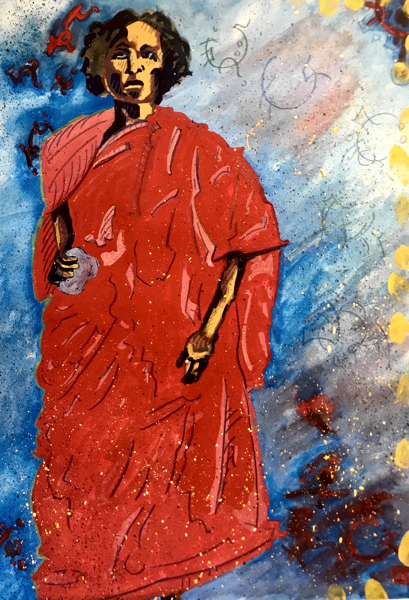 And Saul approved of their killing him. This single sentence is key to what Luke is trying to convey in Acts. People are redeemable. A single evil act, even a series of evil acts, does not define an entire human life.

Luke must have heard Saul, who by the time he knew him had changed his name to Paul, tell this story many times. It must have been part of Paul’s regular preaching. We know that it was part of his letter writing. It was his own great repetitive story, the thing he talked about again and again, and it was the right story to tell. Of course, we as readers don’t know the whole story yet. He didn’t talk about his time as a persecutor of Christians without also talking about how he was converted on the Road to Damascus. What’s curious is that Luke doesn’t rush into the whole story at this point. Paul probably told it as a whole narrative, but Luke interrupts it. I think he must have loved and respected Paul, traveling with him as he did, but he also saw all of Paul’s weaknesses as well (we’ll hear more about them as Acts continues), and he never treats Paul with too much respect. So he breaks up Paul’s story, and tells us about Philip instead. This isn’t a digression. Luke is making a point. The story is about the Beloved Community, not any one member of it. The only member of the Beloved Community who gets their own biography is Jesus himself.

So both Paul and Philip are equally important, and it’s Philip who first goes off on a mission to convert non-Jews. He heads off to Samaria, and starts converting Samaritans, those ancient cousins of the Jews who were left in Israel during the Babylonian exile. He provides the pattern that Paul will follow. Or, rather, he follows the pattern that Jesus set, preaching, healing, and confronting evil. Paul will learn from, and follow, this example, coming to say, in effect, that this story is his story.

Your story is my story. That is the sentence that follows conversion, because conversion is not just an act of individual redemption. It isn’t a kind of exorcism, where demons are cast from the mind and the mind is swept clean. In Luke 11:14-54 Jesus makes clear that this isn’t enough. Conversion fills the clean and empty mind with a new story, a new way of thinking about the self, a new way of acting in the world. The part of Paul that approves of the killing of his perceived enemies can’t simply be redirected, so that he starts to approve of the killing of a different set of enemies as he joins a new group. If he’s truly to be converted, then he must learn a new way of relating to the world. He must be inhabited by the story that was told by Stephen and that is enacted by Philip. It must turn from violence to love, from inciting to preaching, from condemnation to healing, from using evil for supposedly good ends to rejecting evil altogether.