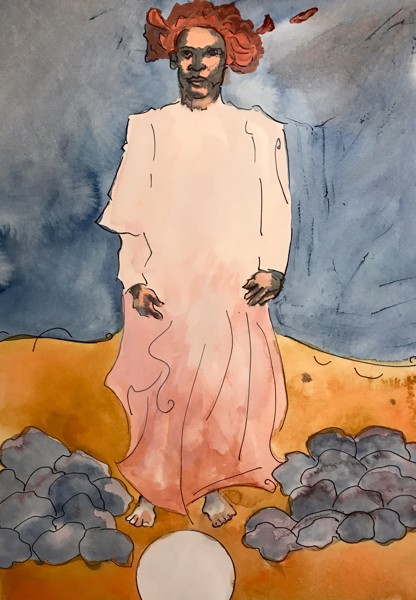 The first retelling of the story of Jesus and the disciples took place on the day of Pentecost, and Peter was the storyteller. This second retelling occurs before a much more hostile audience, and the storyteller is Stephen, who was unknown to us, though present, on Pentecost. The church has raised up new storytellers for its story’s retellings. Stephen doesn’t just repeat verbatim what Peter said. He greatly expands the narrative, adding new thoughts and plot lines, changing the story’s reach and its intention. This is the story retold for the authorities who are threatening the disciples, yet Stephen has no intention of placating them. He doubles down, claiming, in effect, that Jesus’ story is their story, even if they refuse to acknowledge it. Jesus is like Moses, who tries to defend the Hebrew slaves and expects to be credited for it, but is blamed instead. Jesus represents that long tradition in Judaism that worried about seeing all of the religious power in the land concentrated in the temple in Jerusalem, and Stephen quotes Amos and Isaiah to make the point that this worry is and has always been central to the Jewish story. So his retelling is an extension of, not a rejection of, the tradition that the disciples share with their fellow Jews, and that may be why they stone him. He presumes to have authority over the narrative, and their power and control comes, in part, from claiming the narrative for themselves.

This is, in part, why it’s never convincing to me when we try to excuse someone’s bad actions in the past by saying that they were simply a person of their time. A president who held slaves while espousing freedom, an otherwise charitable cleric who could not imagine that African people had the same souls as European people – these persons might be admired for the good things they did in their lives, but they should not be excused from the bad. Particularly when they were part of a community that told a story that, if they listened to it closely enough, would have shown where they were failing in their actions and imaginations. They were trying to live by a number of different stories, some cultural, some religious, some political, and they didn’t know which to prioritize, or how to get the mixture right.

We all do that, of course. These stories constitute the identities that I talked about when commenting on the parable of the great banquet in Luke 14:1-24. The stoning of Stephen presents us with a way of judging which identities we should cling to and which we should let go of, or at least hold lightly. The simple question is this: which of your identities are you willing to die for? It seems a little dangerous to write that, since extremism thrives when one identity takes over and banishes all the others, so I want to make it clear that I’m keeping my question plural, allowing for the possibility that we might have several worthy identities, and that I’m talking about self-sacrifice, and not the sacrifice of others. I’m not asking which identity you’d be willing to kill for. But which of the stories you live by are so important to you that you’d die for them? For me there are only two – my faith and my family. And because I know this, I also know that the stories of faith and family are the only ones I really want to tell and retell. There is remaining mystery in both stories. I’ll need to tell and retell them again and again, and I’ll never fully understand them. But they are the stories that intrigue, that keep me coming back, and they are the stories that give me courage when I’m afraid, strength when I’m weak, hope when the world as it is seems hopeless.