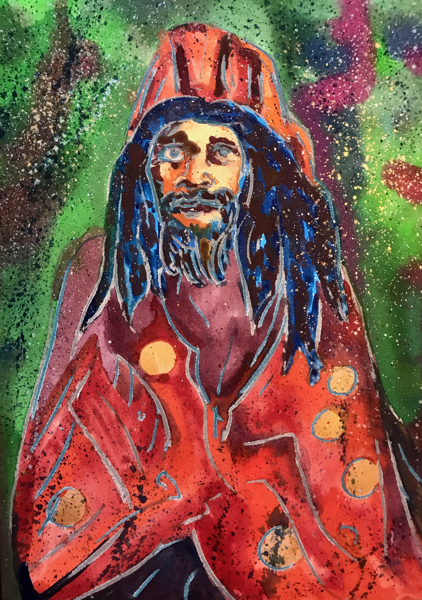 Simon of Samaria, known to the Christian tradition as Simon Magus, is one of those rare characters in scripture who have a particular sin named after them, in this case, the sin of simony. Simony usually means the buying and selling of church offices, but here at the beginning it is nothing more than the belief that one can somehow buy the power to transmit the Holy Spirit. I have been talking, on this blog, about what it means to sin against the Holy Spirit, and here’s a clear example. Thinking that you can control the Holy Spirit because of your wealth is just such a sin. More than that, it’s in this story that the early church reveals something about itself. Despite the claims of its detractors, this group of worshipping, believing, and healing people is not a cult. They claim no secret knowledge which people have to pay to access. God’s love and the power of the Holy Spirit is available to anyone through grace. There’s no way to earn it, and there certainly isn’t any way to buy it.

One can imagine that Simon Magus felt justified in his request. After all, this Holy Spirit was doing a great deal of good for people, truly healing and transforming people as it descended. A person who genuinely wants to do good for the world can look for tools to use in that mission. The problem is that the Holy Spirit is not a tool. Grace is not a tool. It cannot be controlled or manipulated. And those who try usually have hidden motives that they might not even recognize within themselves. Yes, Simon wants to do good. But he’s also used to being known as the healer, the mystic, the guru. He wants to maintain that status, even as he embraces the apostles’ teaching.

Christianity has always been a syncretistic religion, and can be accused with some fairness of a kind of reverse simony. We Christians have often been fine with appropriating other cultures’ spiritual teachings. The very contemplative tradition that I have been interpreting Luke/Acts through was in conversation with Buddhism from a very early date, and you can tell. We tend to think that those who are not against us are for us, and that practices that help cultivate love are good, no matter where they came from. I don’t think that this is a bad thing, as long as it’s done with love and respect, citing our sources and crediting our teachers with what we’ve learned, regardless of their religious tradition. But we don’t own these practices, no matter what they are, and we can’t force the Holy Spirit to flow through them. If we find ourselves confusing these practices with grace, we are making a mistake.

So even at a time when the church has lost much of its secular and political power, and there’s little profit in buying or selling church offices, Simon Magus and the sin he’s named for should still make us cautious. We can go practice yoga, and matta, the Tibetan “mother as other” meditation, we can eat diets based on Leviticus and get really serious about our sabbath practice, we can make sure we’re praying at least five times a day and whirl like dervishes as we seek God, but God’s grace will come to us when God wills it, and we’ll never be able to control it.