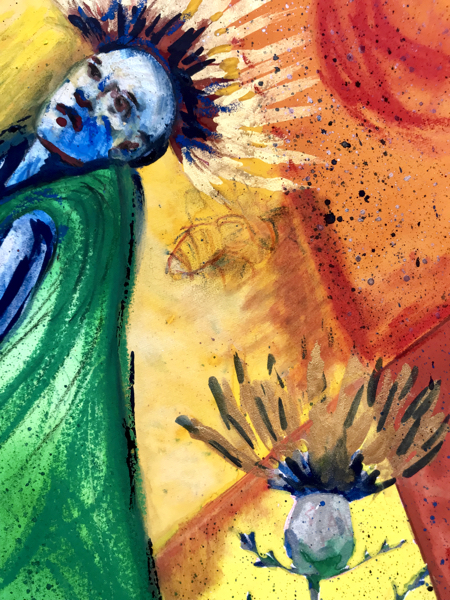 Paul’s story is probably one of the most important conversions in human history. It is the pivot point for the Book of Acts, the moment when the book’s true hero is introduced, the moment that will lead to the conversion of the gentiles and, hence, turn the followers of Jesus from a small community of Jews, living in Israel and worshipping at the temple, into a world religion. The import of this moment cannot be underestimated, but in this post I will only talk about two things – Saul’s vision, and the persecuted community that accepts him and renames him.

First, the vision. A light flashes, a voice is heard, God’s presence is announced. My guess is that, for Paul, a great deal happens as well. Teresa of Avila, whom I have mentioned many times and has been so fundamental to my reading of Luke/Acts, talks about those moments when “the soul sees into God himself.” She says that

all things can be seen in God because God has all things inside himself. Even though this vision passes in a moment, it engraves itself deeply in the memory and causes the most blessed confusion in the soul. This is a great favor. The soul becomes keenly aware of imperfect acts she has committed while inside of God. If only she had realized that she was dwelling inside the Beloved himself when she was doing those unconscious things!

For Paul, this feeling of imperfection must have been much worse than it is for most of us. When we see through the eyes of God, when we come to truly understand that we dwell within the divine, we can feel bad about all of our small failures that have ignored or taken for granted the great love that we’re swept up in. But Paul actively conspired against and tried to murder that love. His sin against the Holy Spirit was much greater than most other people’s. No wonder he was struck blind for three days. One can only imagine how he wrestled with his shame during that time, and how, in his blindness, his great vision remade him.

And yet there was a community that tried, always, to dwell within God, to align itself constantly to that great love. Ananias had a vision of his own, and this vision is as important to Paul’s story as his own. Love compelled him to go and find Paul, to heal him and take care of him. Then, when Paul escaped from Damascus and went to Jerusalem, it was Barnabas, the Son of Encouragement, whom he approached and who vouched for him with the community. Both Ananias and Barnabas understood that Paul, even when he was persecuting them, was also inside of God, to use Teresa’s metaphor. He was already united to them, even though he didn’t realize it and actively tried to resist it.