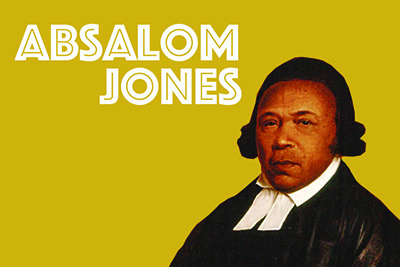 In honor of Black History Month and with the Absalom Jones Symposium and Festal Eucharist coming up on February 16, I invited valued elder and leader, John Harris to share a bit of the history and the significance of this celebration and what it means to our Becoming Beloved Community.

Amy: John, as we prepare for this year’s Absalom Jones’ Symposium on “Social Justice and Racial Reconciliation” and the  Festal Eucharist, thank you for sharing the history and significance of this event. You’ve helped me understand the importance of the Absalom Jones symposium as a symbol of the evolution of The Episcopal Church’s response to race and racism. Can you share a bit of the history of this event and how it has shifted over time?

John: This event has been a way for Black churches to come together and celebrate our history and the Legacy of Absalom Jones, who created ways for freed Africans to participate in the early formation of the Country and the Episcopal Church. He was the first ordained Black priest of the Episcopal Church. Richard Allen, his friend and partner founded the African Methodist Episcopal Church(AME) Church, the first Black Denomination in the nation.. Together, they forged liberation paths for Blacks and uplift through the Free African Society. This event allows us to remember this history so that we don’t forget our past struggles and where we are today. In the last three years, the event has been more intentionally designed to bridge the gap between AME denomination and the Episcopal Church. Our history is a shared one.

In our diocese,  for the first 26 years the four Black churches historically rotated hosting the event. Then, about 7-8 years ago, the Union of Black Episcopalians (UBE) agreed that we wanted to open the event up to the whole diocese and so Christ Church Cathedral was included in the annual rotation. Five years ago, we grew the event into a symposium, adding in an educational component so that we could come together to both worship and learning. Last year for example, the symposium focused on “Becoming The Beloved Community”.

Amy: And this evolution continues as UBE is leading efforts to now include the Legacy of Absalom Jones through the Symposium in the Becoming Beloved Community work so that it becomes a keystone of our practice.

John: Yes. Absalom Jones symposium fits into the Beloved Community initiative of the Diocese of Southern Ohio. Absalom Jones and Richard Allen worked in service to the entire community–not only free Africans–but because of the time, they had to create space for Africans to be supported. Still today, that space and support for the Black community is needed in different ways. The AME Denomination and the St.Thomas African Episcopal Church was born out of that need and  in response to slavery. We want to honor that history and relationship by incorporating this relationship between UBE and AME into Becoming Beloved Community. This year, the event will highlight the bridges we are building through both the Keynote Speaker for the Symposium and the Preacher for the Eucharist. We are creating space to have dialogue around Social Justice and Racial Reconciliation.

Amy: Yes. And, based on the history of White Supremacy and how power works, there is also a risk that the event becomes co-opted by the church in expanding beyond UBE to the diocese and to Becoming Beloved Community–that it loses some of its essence and the roots grounded in rich Black history.

John: This is true. And there is some fear in that. Some of our chapters around the country, co-opts have taken over. Bishops and dioceses have taken over. For UBE and Black churches, this is a sense that ‘This was ours. That we started this 40 years and the white church has taken over and watered down.’ There is some truth in that, however here in Southern Ohio there is a sensitivity to honoring the contributions of Black Episcopalians and others who have been historically marginalized by Society. For instance in 2012 the DSO/UBE Annual Absalom Jones Commemoration was held as a Celebration of the 35th Anniversary of Women’s Ordination in the Episcopal Church.

Amy: This history–both patterns of domination and strategies of resistance–is so important for us to name and understand so that we our impact aligns with our intention. I’m still curious why you feel the importance in expanding this historically Black-led event and symposium to beyond Black churches to diocese wide?  Especially at the risk of the event being co-opted?

John: We do want to expand it. For twenty-six years, we’ve celebrated Absalom Jones in an Annual Eucharist. Churches came together, hosted by a Black church. The service was rooted in the Black experience–rooted in our history and Black tradition. It offered fellowship that the Black church is known for.

As we added the symposium to the event, it grew beyond Black Churches to create space for all of us–across the diocese–to engage in dialogue through an eucemencal lens. The symposium builds bridges, learning and being together–stories from all of us so that we can share in that. I’m observing more and more White people becoming more sensitive to the topic of White privilege. That is important. And there needs to be space for these stories, where these stories become part of the dialogue. Black folks need to hear that. We all need to know how we are all impacted and all together. This is Becoming Beloved Community.

In term of co-opting, we need to be sensitive that we don’t prohibit Black churches from leading the eucharist. The eucharist offers opportunity to look through a unique cultural lens–important for Black Episcopalians. It’s like going home, brings us home into The Episcopal Church. Owning that part will be important to Black history– utilizing the spirituals, unique to the Black experience, we protect that. The preacher is someone who can tell the story, relate to the story of Absalom Jones and the Black experience, and understand how it has been very important to be in the conscious of the church and society. Not just for people of color but for all marginalized people, women, LGBTQ, poor people.

Amy: As you share this, I’m understanding that Black Episcopalians have historically led our Church’s efforts in racial reconciliation and healing. These efforts have sowed the seeds of Becoming Beloved Community, where we are being called today.

John: We have all benefited from the Black voice in the church, holding the Church accountable to all of God’s children. That is something we need to remember and celebrate.