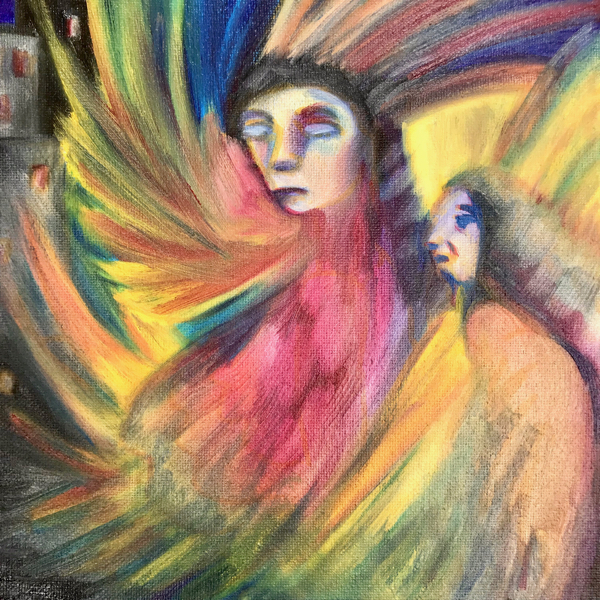 Those who’d seen them told the others,
and we gathered at Lot’s doorsills
to watch them eat.  They had just dipped
their fingers into lentils

of fine dust.  Slowly he released them,
each small foot oiled and dried.
“I want them,” someone whispered.  Another,
like an ardent echo, sighed.

Another said it openly.
“We want them!  Send them out!”
we shouted.  We’d seen unearthly beauty
enter a house, bathe, eat,

prepare to sleep.  Some might stop at looking,
but others, seeing it,
would reach out and, touching, they would take it,
even if taking it

destroyed what they desired.  We surged
against the strangers, screaming,
and the angels calmly struck us blind
with the light of our own dreaming.

Still reaching out, we touched each other:
coarse cloth, coarse hair, coarse skin –
and cringed from it.  We pawed cool air
for the lost celestial men,

whose footfalls faded lighter, lighter
till they were light’s own light
departing – or so it seemed to us
in our god-dazzled night.

Hudgins suggests that the sin of the Sodomites arises from them knowing only one response to profound beauty and revelation.  When heavenly messengers appear among them, they want to rape them. They want to assert power over them, to possess them, to subject them to carnality.  Their sin is famous because it’s an extreme response to a common instinct. Faltering before beauty and mystery, we seek to belittle it, control it, and reduce it to something we can understand.

For a moment in time, the seventy disciples have become heavenly messengers.  They go to the surrounding villages to declare the Kingdom of God through their words and through their deeds.  Something profound is seeping through the corners of the world. Revelation is appearing in the corner of the eye.  If the people were to turn their heads and look, they would find themselves transformed. Jesus prepares the disciples for an encounter with Sodom.  Some, he says, will reject this revelation and use the tools of violence and rape to repress it.

Yet when the disciples return, they have not encountered Sodom.  On the contrary, they return rejoicing, and in welcoming their joy Jesus is at his most poetic.  Cosmic results accompany their traveling, and the small, biting malevolence of the world begins to fall away.  Nevertheless, Jesus says, don’t rejoice that the spirits submit to you, but that your names are written in heaven.  It is not the disciples control over spiritual forces that is important. It is their participation in the revelation of the Kingdom of God.

When we encounter beauty and mystery, when we are moved beyond our understanding and catch a glimpse of revelation out of the corner of our eye, how do we respond?  Do we reject the glimpse, attempt to control the revelation? Or do we simply rejoice, and invite others to rejoice with us?