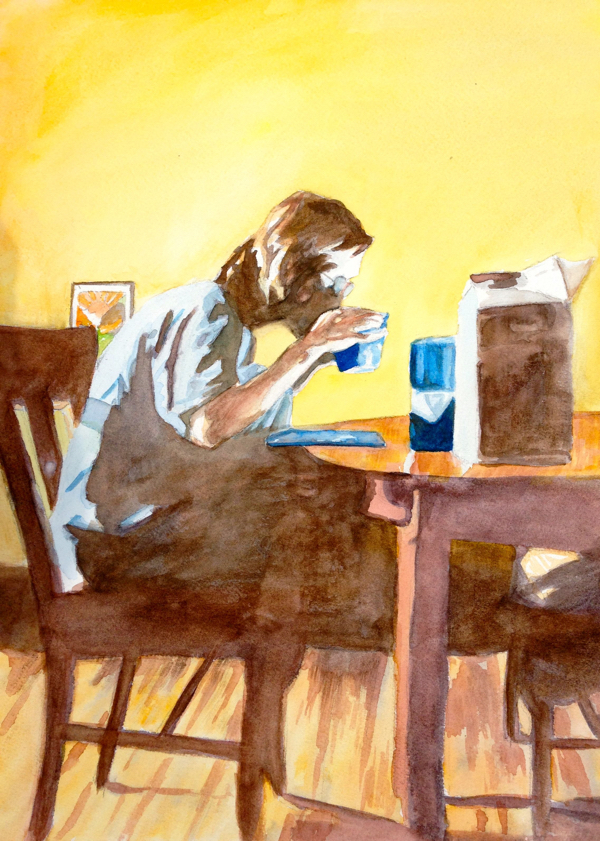 I was sitting with other clergy in a Bible Study, and we were arguing about this passage.  After awhile I became indifferent to the argument, and began to think about the dishonest wealth that I had received in my life.  I took out a sketch book and wrote this poem for my wife:

You are my dishonest wealth.
Close-faced when I met you,
we walked on snow as dry as sand.
I talked about North Africa.
I was so exotic.  You were very quiet.

Later we walked on grass.
I sang “My Funny Valentine” to you.
It was so exotic, this wealth of love.
I was still only half myself.
I lied and said, “I’m this, and this.”
Truth grew thin so I could replace it.

Years later she walked on grass,
our daughter, in blue overalls.
It was so exotic, the sunlight in her hair.
I was aware of how my pretense had allowed
our movement to a house, her birth,
our happiness the gift of how
I’d preened and postured –
on snow, dry as a desert,
on grass, with song, and all along,
we slowly saw through to each other.

I don’t deserve my wife’s love, and she doesn’t deserve mine.  We were so unformed when we met that we could only be dishonest.  We had no truth to tell, yet. We created the truth of ourselves together, the truth of who we were as individuals and the truth of who we are as a couple.   Our love for each other was a kind of grace – more than we deserved, but always there, and always shaping us. Because of our love, I understand the kind of dishonest wealth that Jesus is talking about.  I’ve been the recipient of it.

The wealth we receive from God is always dishonest.  We can do nothing to merit it, we can only accept it.  Once we’ve received it, we need to be faithful with it.  We need to cosset it and protect it and be grateful for it.  This is why Jesus’ seemingly random statement about divorce at the end of this passage makes sense to me.  If I know this dishonest wealth through my marriage, then I need to protect my marriage, to treat it as precious.  And this is true of any of the great, gifted loves. Not everyone is meant for marriage, and not every marriage is a form of dishonest wealth.  Sometimes they’re just dishonest. But when one receives the gift of love, from whatever source, one must be faithful to it. True riches, the riches that only God can give, will follow.