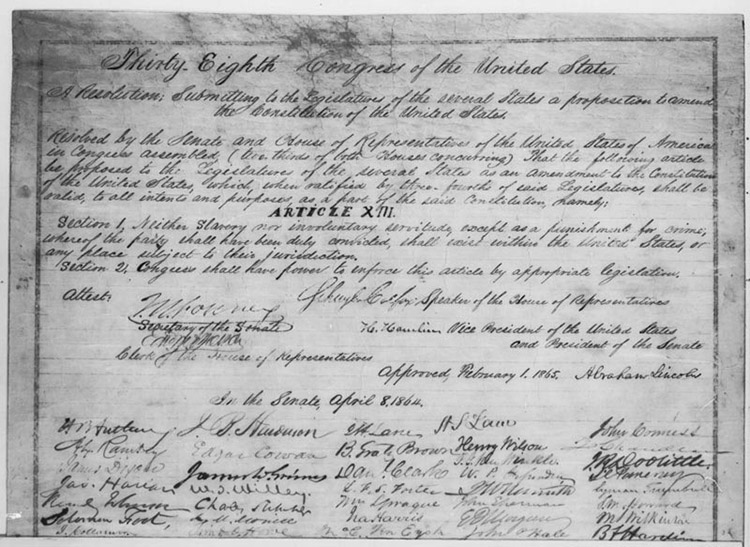 My earliest memory of Dr. Who, the British science-fiction television program, is at my grandmother’s house. One afternoon, as I was going through the channels on her black and white two-knob television set, I found this weird show that I couldn’t take my eyes off, featuring an extraterrestrial from the planet Gallifrey. Back home, I tried to find that program, but I didn’t know the name, the time, the channel – nothing. My grandmother lived 550 miles away, and the program wasn’t one of her shows. Decades later I found the program on PBS and the rest is history, or the “wibbly-wobbly timey-wimey” future featured in the “Dr. Who” programming.

Watching the Doctor and his exploits encouraged, in part, my broader take on life and imagination. I began asking the big questions. What happens if different events were/could be changed? Why are aliens bad? Are slavery and self-harm interconnected?

Amendment XIII to the United States Constitution
Section 1. Neither slavery nor involuntary servitude, except as a punishment for crime whereof the party shall have been duly convicted, shall exist within the United States, or any place subject to their jurisdiction.
Section 2. Congress shall have power to enforce this article by appropriate legislation.

I wanted to title this article, “We Know All This: Let Wisdom Reign.” That’s catchy but not my point. My point starts with the belief that we humans have a fatal flaw. We find ourselves in situations where we don’t get the message of our situations. Of course, some are born with silver spoons while others have no utensils. There are massive planes between us and our closest neighbor. Still, not totally my point because we want what others have, and we want to destroy others in the process.

How does my wanting my neighbor’s car impact others? Look broadly. The neighbor’s car – it can be symbolic of any number of things. For me, it would mean having that status, that power, that possession. It’ll be mine and, to that extent, my neighbor’s vehicle will disappear. It no longer exists. It’s mine. My neighbor means nothing.

How did we get to this point? In Tom Wolfe’s Bonfire of the Vanities, we see two types of individuals. Both are bent on enslaving others and as a result, self-harm. Wolfe portrays characters Sherman McCoy as a Wall Street man and Larry Kramer as the Assistant District Attorney. They allow their flaws to lead them: Make money regardless of the cost. Seek fame regardless of the lives that are trampled upon. But in the end, both men wind up enslaving/harming themselves.

Slavery is old. There are artifacts that date back thousands of years where slaves and masters existed. One person standing above another. One person robbed of agency. One person gaining from the sweat of another’s brow. And there is something else happening, something behind the scenes. What happens to a person that gains from another’s loss? Does their inner image become hideous – Dorian’s portrait that Oscar Wilde writes about? And, is the robber colluding with darkness, evil, anti-human ways? Is the robber completing suicide slowly, minutely, almost imperceptibly?

In 1865, slavery in the United States was constitutionally abolished, “except…”

On September 20, 1850, an act was promulgated wherein slave trading was no longer legal in Washington, DC, though slavery continued elsewhere in the country.

In 1846, a proposal forbidding slavery in the lands acquired during the Mexican War was defeated.

In 1829, slavery was abolished in Mexico.

In 1788, slaves petitioned for the abolishment of the institution in the state of Connecticut; and prior to that in 1773 in Massachusetts.

In 1783, Chief Justice Cushing wrote that slavery was “wholly incompatible and repugnant to its existence.” (He did say that criminal acts could forfeit liberty).

A curiosity exists. It travels the globe. It spans time. The enslavement of others locks both the master and the victim in an emotional, physical, mental, and spiritual struggle. This struggle only has one outcome. Destruction. After the destruction, good can happen. Reparations can be awarded, agency can be restored, forgiveness can be offered. But that which is gone…is gone.

We can go back to the dawn of time. We have evidence of those wanting life, and those seeking death – those believing in humanity, those complicit with anti-human desires.

Slavery and self-harm. They usurp people’s destiny, they rot, they destroy. Stories, laws and admonishments can occur left and right, but if the lesson is not learned, then what do we have? In 2 Samuel, there is a morality tale. It involves a Bathsheba, David, and Uriah. Uriah was the proud soldier, was proximally close to David, and brought honor to the family. Bathsheba was his wife. (In ancient times, that meant she was his property). David stole her, killed Uriah, brought shame upon the families and the kingdom. David completed a slow suicide. But, in this morality tale, instead of the story ending with his funeral, it’s the funeral of his son.

Obviously, I did not know that the turn of a dial in my grandmother’s house would lead me in such a direction. But looking broadly, it didn’t. The flaw has been present in a multitude of generations. And, the cure has been present, too. We know the difference between right and wrong. We know how to make things right. We know the better path.

As an afterthought, but not really because the person became so important, the writer of the Bathsheba, David, and Uriah incident wrote a sequel. The wisdom of God was in Solomon. How ironic! In a broad way, we hear God’s laughter at our plans for self-destruction. We try to believe that our silverware entitles/condemns us. No. Nothing made by our hands will ultimately prosper. And here’s another big question: “Why do we try and pretend that our little desires will?”

Author Quinton Jefferson is an Adjunct Assistant Instructor of Theology at Thomas More University and a member of Christ Church Cathedral.