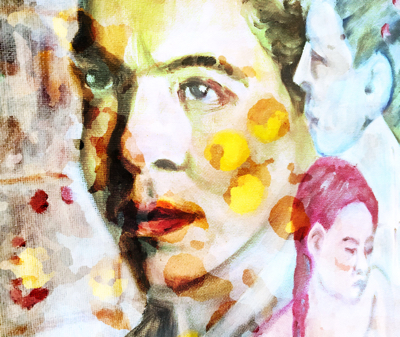 Jesus issues a duo warning in this passage. First, when you fail (and we are all bound to fail), don’t lead anyone after you in your failure. Second, the surest guard against failure is the encouragement and forgiveness of community. If we are to accept the schema of self that I’ve talked about previously in these posts, we must ask what role community plays in our efforts to strip away ego and grow close to God. And it must be admitted that identity is not necessarily bad, just as its not necessarily good. We saw, in the parable of the heavenly banquet, that clinging too strongly to our identities prevents us from joining in the banquet that God is preparing for us. But it isn’t really possible to be part of a community without taking on an identity. As soon as you say “I belong,” you are necessarily claiming an identity in the group that you belong to. Identity cannot be entirely wrong or bad. As long as we hold it lightly, and don’t confuse our identities with our souls, we are helped by it, because we are helped by the communities we belong to.

What a community Jesus is describing! The community of his disciples is very different from many of the other communities we might belong to. To belong to this community is to be raw and exposed. This is a community that requires one to admit fault and abandon the need to be thought well of. In this community love, as the Apostle Paul puts it, does not insist on having its own way. And because one is exposed, faulty, and repentant, it becomes hard to lead other people astray in such a community.

At Youth Group a week ago, I said that I 95% believed in something. My daughter, who knows me well, and who has lived sixteen years listening to my opinions, asked me what I meant. I said that I always try to hold five percent back from any of my political or moral beliefs, because I always want to keep open the possibility that I might be wrong. I stand by that, even though it might make me seem wishy washy. But being one hundred percent certain is insisting on having things our own way, and I don’t want to lead children into this one hundred percent certainty mindset. When we embrace this mindset, it becomes much harder to admit our faults and ask for forgiveness. It also becomes harder to forgive, as forgiveness becomes associated with winning. “Of course I’ll forgive you, once you admit that I’m right.”

Such thinking is at the root of communities of dominance and exclusion, exactly the kinds of communities that create destructive, self-serving identities. But a community that has an ethic of repentance and forgiveness, and doesn’t misuse that ethic or turn it into a form of control, posits a different kind of identity, one that reduces the controlling needs of the ego and cultivates humility in its members. Living in such a community is easy and joyful. Laughter is heard often in such a community, and people feel free to play. It is in this passage that at least two of the main spiritual themes of Luke are realized, and we see how joy and forgiveness lead to beauty and grace.